Evangelical, Orthodox, and academic sources weigh security concerns against the right to associate with historic patriarchate losing popularity and suspected of war collaboration. 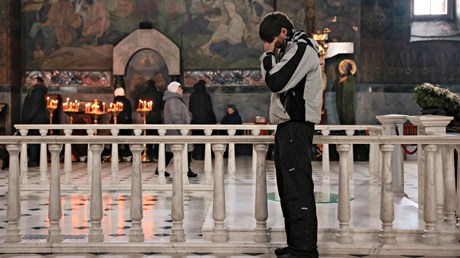 Ukraine, a bastion of religious freedom, is moving to possibly outlaw a church.

President Volodymyr Zelensky began the month by endorsing a draft law to “make it impossible” for the Ukrainian Orthodox Church (UOC), canonically linked to Moscow, to operate. His December 1 decree followed raids on several monasteries under the UOC’s jurisdiction.

“We will ensure complete independence for our state. In particular, spiritual independence,” stated Zelensky. “We will never allow anyone to build an empire inside the Ukrainian soul.”

The reaction from Russia was swift—but also illustrated the issue.

Kremlin spokesman Dmitry Peskov, however, was more specific, accusing Ukraine of “waging a war on the Russian Orthodox Church” (ROC).

His comment prompted a UOC spokesman to assert his church is not Russian.

The raids—centered on the 11th-century Kyiv-Pechersk Lavra complex, known as the Monastery of the Caves—uncovered large amounts of cash, “dubious” Russian citizens, and leaflets calling on people to join the Russian army, according to Ukrainian authorities. Other material cited as evidence included prayer texts of ROC patriarch Kirill and a video of hymn singing that celebrated Russia’s “awakening.”

Kirill has publicly blessed Russia’s invasion of its neighboring nation, even promising forgiveness of sin to soldiers who die in the war. Security services also described finding UOC …