Composed during World War I, “Shchedryk” folk song has survived the Nazi, communist, and now commercial eras to remind and revive the ties of hearth and home. 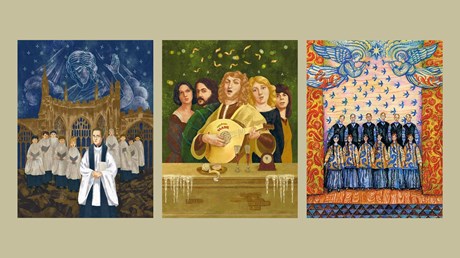 Adapted from A Ukrainian Christmas (Sphere 2022):

But as Ukrainians bear the onset of winter cold, hearts are warmed by their millennia-long participation in the caroling tradition. And while “Shchedryk”—better known as the popular “Carol of the Bells”—has become one of the gems of world culture, many Ukrainian carols have a distinct trace of sadness to them.

One illustration is “Ne Plach, Rakhyle” (“Don’t Weep, Rachel”), one of the oldest in Ukraine. Referencing the Old Testament tragedy enacted by King Herod, the carol has comforted us in our many times of suffering. And today its lyrics tell the modern history of the Russia–Ukraine war: Ukrainian children are dying due to “Love for Ukraine—is all their fault, all their fault.”

Yet music has a special ability to create an atmosphere and transfer a feeling across space and time. For Christians, it is also the instrument through which God expresses the unspeakable, and a few chords can give us a glimpse of Paradise. No wonder the shepherds received the news of the newborn Messiah through angels singing!

The first mention of a Christmas carol dates back to 129, a time before Christmas existed as a holiday. In that year, the then-Bishop of Rome announced that “in the Holy Night of the Nativity of our Lord and Savior, all shall solemnly sing the Angel’s Hymn.” …