How the fact of the Incarnation fulfills the hopes of every culture. 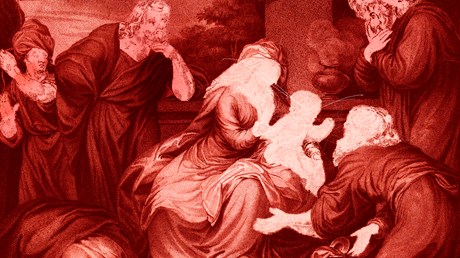 On All Saints’ Day, my wife and I often tell stories about the saints who have most impacted us. This year, I shared with my family the story of C. S. Lewis’s conversion.

For some time, he had been teetering on the precipice of faith, unable to resolve his intellectual difficulties with Christianity. On a late-night walk around Oxford with his friends Hugo Dyson and J. R. R. Tolkien, he voiced his essential objection.

Everything that matters, Lewis said, belongs in the realm of myth.

Lewis had a great fondness for Norse mythology that went all the way back to his youth in Northern Ireland. For him, however, myth was about meaning making , whereas history was about unrepeatable facts, collected and analyzed in an empirical way. The great tragedy of human existence was that myth and history did not and could never intersect.

Like the German thinker G. E. Lessing before him, Lewis described the “ugly ditch” between history and theology. Irrespective of how radiant his life was, a man named Jesus who lived 2,000 years ago could never be anything more than an inspirational figure.

Dyson’s and Tolkien’s responses were electrifying: In this instance, they said, myth had become fact. Everything eternal and mystical—the deep magic of the world—was real and incarnate in the person of Christ. He was not simply a historical person but the Creator God enfleshed to save the human beings he had created.

With that riposte, Lewis was suddenly able to put the pieces together. As he wrote later to his friend Arthur Greeves, “the story of Christ is simply a true myth: a myth working on us in the same way as the others, but with this tremendous difference that it really …