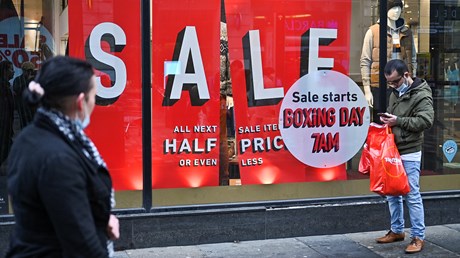 Among the carols filling the air in Britain at Christmastime is the story of a 10th-century king braving the snow—“deep and crisp and even”—to help a poor man gathering firewood.

“Good King Wenceslas” sets out to deliver food, wine, and logs, and the shivering servant who accompanies him finds that the king’s very footsteps are warm. “Ye who now will bless the poor shall yourselves find blessing,” the final verse promises.

The carol begins with the king looking out “on the Feast of Stephen.” St. Stephen’s Day falls the day after Christmas and honors the first Christian martyr, whose story can be found in the Book of Acts. John Mason Neale, the 19th-century Anglican priest who composed the words to “Good King Wenceslas,” was alluding to a long history of charitable giving on the day.

Yet for the vast majority in Britain today, December 26 is simply Boxing Day. If there’s a tradition covered in the press, it’s that of the Boxing Day sales, when bargain-seeking crowds descend on the country’s malls, akin to Black Friday in the United States.

Francis Young, a UK-based historian of religion and belief, points out that even the idea of shops opening the day after Christmas is a recent development. “It would have been known as St. Stephen’s Day certainly right down to the middle of the 19th century,” he said in an interview with CT.

The name Boxing Day can be traced to around 1830, but “Christmas boxes” associated with the holiday date back to the 17th century. These were clay containers with a slot for coins, like piggy banks. At Christmas, the collected money was distributed to servants as well as tradespeople …