Closure of corridor to Nagorno-Karabakh by Azerbaijani activists stretches into third week. 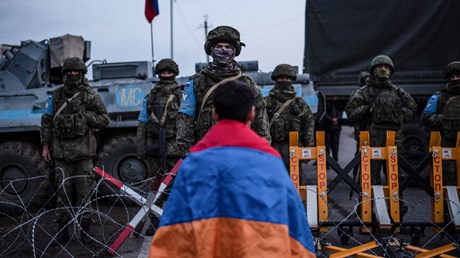 There are no oranges in Artsakh for Christmas.

Celebrated on January 6 according to the local Orthodox calendar, holiday festivities will be curtailed this year in the disputed Caucasus enclave of Nagorno-Karabakh. Demonstrations by reported environmental activists from Azerbaijan have closed the one road connecting the mountainous territory to Armenia, and Russian peacekeeping forces have failed to intervene.

Over 100,000 Armenians depend on daily imports of 400 tons of food and medicine to the enclave they call Artsakh. With the blockade of the Lachin corridor now in its third week, local officials are warning of a humanitarian disaster as they implement price controls and ration remaining goods.

But the Christmas tree is lit in the central square of the capital, Stepanakert.

“People will carry on with the traditions as best they can,” said Aren Deyirmenjian, country representative for the Armenian Missionary Association of America (AMAA). “But we will reflect the love of a God who stays by your side, even when all goes wrong.”

During a 44-day war with 6,500 casualties in 2020, Azerbaijan recaptured three-quarters of its internationally recognized sovereign territory, before Russia engineered a ceasefire. The indigenous Armenian inhabitants controlled the enclave for the previous 30 years, claiming the right of self-determination in an unrecognized 1991 independence referendum.

Following its defeat two years ago, Armenia pursued peace treaties with neighboring Azerbaijan and Turkey, which had backed their Turkic kin with decisive drone technology. But these were interrupted by further clashes, in which Azerbaijan seized further territory in Nagorno-Karabakh and even along Armenia’s border.