As Putin professes a ceasefire over the Orthodox holiday and a famous Kyiv monastery cathedral changes hands, evangelical seminarians relate the toll of ten months of war. 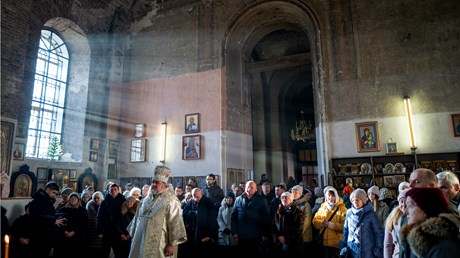 In advance of Putin’s unilateral declaration of a three-day truce over Orthodox Christmas today, Ukrainian seminary leaders shared their reflections on the impact of ten months of unabated conflict.

“War is exhausting—but this exhaustion does not happen overnight,” wrote Roman Soloviy, director of the Eastern European Institute of Theology. “Nevertheless, our mission continues.”

Reviewing his own emotional response since Russia invaded Ukraine on February 24, Soloviy cited the impossible choices forced upon his nation: Save your family or your neighbors? Flee the country or stay and help?

He could not read, listen to music, or watch movies for many months.

The stress only surged as reports proliferated about atrocities, complicated by the frustration that Ukrainian churches could not help everyone. Decisions needed to be made in darkness, while seeking to balance one’s own psychological health.