Foursquare leader put emphasis on praise and penned the most popular church song of the 1990s. 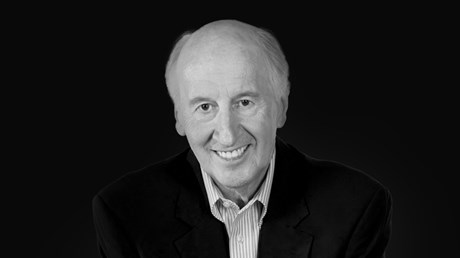 Jack Hayford, the Foursquare Church leader who taught evangelicals that God is enthroned in the praises of his people, died on Sunday at the age of 88.

Hayford was the longtime pastor of the Church on the Way in Van Nuys, California; the author of “Majesty” and more than 500 other praise and worship songs; and the fourth president of the International Church of the Foursquare Gospel. He regularly led weeklong seminars for pastors that expanded and shaped evangelicals’ view of worship. He convinced a wide range of people not only to occasionally raise their hands while praying and accept glossolalia as a special prayer language but also, more importantly, to see worship as central to the work of the church.

“Worship has often been misunderstood as the musical prelude,” Hayford wrote, “rather than the means by which we, as the people of God, invite the dominion of his kingdom to be established on earth. Psalm 22:3 says that the king of kings is literally ‘enthroned’ in our praises. Wherever God’s people come together to worship, we become a habitation for his presence.”

Hayford was a Pentecostal bridge-builder and a pastor to pastors who did much to promote charismatic renewal practices. Even people who had historically been skeptical of Pentecostalism were drawn to Hayford.

“I think pastors sense in him what they are longing to be,” Lloyd Ogilvie, a Presbyterian minister who worked closely with Hayford, said in 1989. “He is rooted in historic Christianity, has the fire and dynamism of a charismatic, understands the relevance of social responsibility, and can mobilize individuals. … You don’t usually find those qualities combined in one …