Hindu extremists in Chhattisgarh burn down churches and homes and attack tribal believers. 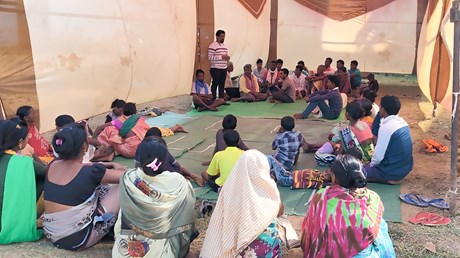 On New Year’s Day, a 500-person mob assembled in the village of Gorra, a small community in the central Indian state of Chhattisgarh, and summoned the town’s Christians. After about 15 people arrived, the Hindu extremist crowd attacked.

Aytu Ram Dhruw, a local Christian in his late 20s, heard the news from an injured friend who told him he needed immediate medical attention.

“About 20 of us quickly rushed to the village to carry them to the hospital and met the mob on our way while entering the village. The mob caught us and began to assault us,” Dhruw said.

While most of the young people outran the mob, Dhruw’s father Bahadur, along with three others, were tracked down.

“They beat my father and three others with sticks, legs, fists, bricks, and stones until they all fell unconscious,” Dhruw said.

While Dhruw and his friends managed to take the victims to the hospital, Dhruw had to release his father from the hospital the same night when two of the assailants identified him in the hospital and threatened to call the mob on them again.

“We did not return to our village since that day,” Dhurw said.

The attack on Gorra’s Christians is far from an isolated incident.

Weeks of coordinated attacks on tribal Christians in the central Indian state of Chhattisgarh have left nearly 1,500 people homeless and traumatized. Right-wing Hindu residents in the Bastar division of the state have chased Christians from their homes and vandalized and demolished their houses and churches, enraged that their neighbors have refused to reject their faith.

“Accusing us of following a foreign religion, and leaving the tribal culture, they gave us a choice either to recant our faith or leave our …