The faith intertwined with American football may also call us to care better for the players whose bodies bear the brunt of the sport. 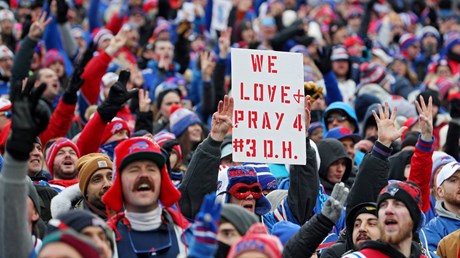 Football is filled with moments of prayer. As a historian who studies sports and Christianity, I’ve written before about the ways the practice in enmeshed in the sport; it’s so common that it can be rightly understood as part of the fabric of the game.

Still, last week’s public outpouring of prayer in support of Buffalo Bills safety Damar Hamlin stands out for its scale and scope. With Hamlin’s life hanging in the balance, people throughout the NFL community and across social media turned to a higher power, desperately seeking comfort and hope. The intensity was so great that The New York Times and the Associated Press ran stories seeking to explain what was going on.

It was a remarkable moment for those of us who believe in a God who hears our prayers, and it was even more remarkable to learn that God seemed to be granting our requests. Reports last week told of recovery and healing for Hamlin, detailing notes that he wrote to a nurse (“Did we win?”) a video chat with his team (“Love you boys”), and social media posts thanking his supporters (“The Love has been overwhelming.”).

When former NFL player Sam Acho responded with a tweet—“God is so good. Prayer works.”—the appropriate response for us should be “Amen.”

At the same time, before the heightened emotion of the moment recedes and the NFL playoffs begin, it’s worth pausing to reflect on what transpired. What lessons can we learn, what next steps should we take? As Christians, how do we make sense of all that has happened?

With a nod to Damar Hamlin’s jersey number, three key points and possibilities stand out to me.

First, the prayers that seemed to blanket social media …