Does Christian theology overlap at all with the beliefs suggested by a prayer from the Sikh winter festival Lohri? 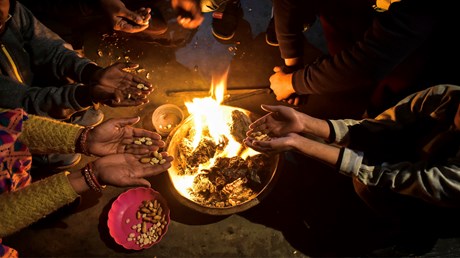 Each winter, Sikhs and Hindus across India and around the world thank their gods for a fruitful winter harvest during the Punjabi festival of Lohri. Like on Halloween, children go door to door singing folk songs and demanding lohri or “loot.” In return, neighbors give out money or snacks like sesame sweets, jaggery, popcorn, puffed rice, and peanuts. Because the date of the holiday follows the Vikrami (an ancient Hindu) calendar, Lohri falls on either January 13 or 14.

The night of Lohri, family, friends, and relatives gather around a bonfire dressed up in traditional Punjabi attire and make offerings to a fire god with a small portion of the children’s loot. The party walks around the fire together, throwing sesame snacks into the blaze and praying aloud in Punjabi, “Aadar aye dilather jaye (May honor come and poverty vanish)” and “Til sade, paap sade/jhade (As the sesame burns, thus may our sins burn/fall off).” The celebration ends by eating a traditional holiday meal, performing folk dances, and singing folk songs.

Sikhism was founded around 1500 by Guru Nanak (1469–1539) and nine subsequent gurus developed the community and the Sikh faith. Guru Arjan, the fifth in line, compiled the Adi Granth, which is the first authorized book of Sikh scripture. Sikhs believe there is only one god, genderless and eternal, and refer to this god as Waheguru (wonderful teacher). Sikhs also believe in rebirth and karma.

Those who do not serve the True Guru [God] and who do not contemplate the Word of the Shabad [Sikh scriptures]—spiritual wisdom does not enter into their hearts; they are like dead bodies in the world. They go through the cycle of 8.4 million reincarnations, and they are …