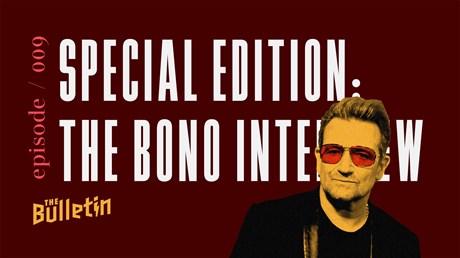 Last October, Mike Cosper had the opportunity to sit down with U2’s Bono for a conversation about life, art, faith, and death—all the subjects of his new memoir, Surrender. That interview was part of our December cover story, and on today’s episode of The Bulletin, we’re sharing the whole conversation. They talk about creativity and creation, the power of death to shape our lives, and the role that evangelicals have played in his efforts to bring relief to those suffering with AIDS through the ONE campaign.

Joining us this week:
Bono has been headlining stadiums with U2 for four decades. The band has sold 170 million records and won 22 Grammys and a host of other awards, including the Kennedy Center Honors. Time magazine’s 2005 Person of the Year, Bono’s work as a philanthropist and activist has resulted in significant relief for those in Africa suffering from poverty and sickness.