“Nicaea-sized” questions discussed at conference of 400 theologians from 44 countries include the “heresy” of ethno-phyletism. 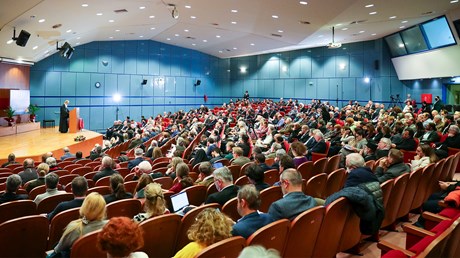 Nearly 400 Orthodox Christian theologians from 44 countries convened in the largest international conference of its kind in Greece on Thursday (Jan. 12) to discuss “Nicaea-sized” questions facing the Eastern Orthodox Church amid war and bitter division.

Some of the most contentious issues at the Mega-Conference of the International Orthodox Theological Association, meeting in Volos, have been exposed by Russia’s invasion of Ukraine in February, which exacerbated a split between a newly independent Orthodox Church of Ukraine in Kyiv and the Russian Orthodox Church based in Moscow.

The conference’s keynote speaker, Metropolitan Ambrosios (Zografos) of Korea and Exarch of Japan, a bishop of the Ecumenical Patriarch of Constantinople, told the assembly Wednesday evening that the various branches of Orthodox Christianity had fomented a heresy by taking sides in the war, calling it “an unspeakable travesty” that as a result, “most Orthodox leaders have failed to condemn this diabolical war unequivocally.

“We cannot even say, ‘Well this is a war driven by politicians. Our churches are against it,’” Ambrosios said, “because so few of our church leaders have actually taken a public anti-war stance.”

At the root of the Russia-Ukraine split is a theological heresy called ethno-phyletism that conflates church and nation, Ambrosios argued. The practice of applying church governance based on ethnicity, nationality, or culture rather than geography, the metropolitan said, is “nothing less than the greatest danger to the Orthodox unity of the church.”