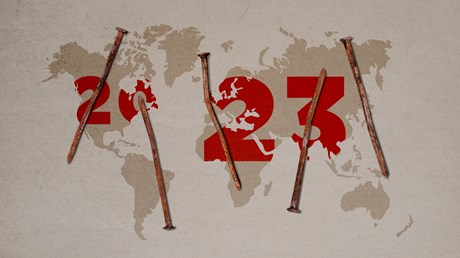 More than 5,600 Christians were killed for their faith last year. More than 2,100 churches were attacked or closed.

More than 124,000 Christians were forcibly displaced from their homes because of their faith, and almost 15,000 became refugees.

And North Korea is back at No. 1, according to the 2023 World Watch List (WWL), the latest annual accounting from Open Doors of the top 50 countries where it is most dangerous and difficult to be a Christian.

The concerning tallies of martyrdoms and church attacks are actually lower than in last year’s report. But Open Doors emphasizes they are “an absolute minimum figure,” and is quick to note the data decline does not suggest real improvements in religious freedom.

For example, the reduction in church closures was “due in large part” to Chinese officials having closed almost 7,000 churches over the prior two years. And the drop of Afghanistan from No. 1 last year to No. 9 this year “offers little cheer” because it’s driven by how most Afghan Christians “went deep into hiding or fled overseas” after the Taliban’s takeover.

Overall, and same as last year, 360 million Christians live in nations with high levels of persecution or discrimination. That’s 1 in 7 Christians worldwide, including 1 in 5 believers in Africa, 2 in 5 in Asia, and 1 in 15 in Latin America.

And for only the third time in three decades of tracking, all 50 nations scored high enough to register “very high” persecution levels on Open Doors’ matrix of more …