Evangelical and Catholic pro-life groups come together for the first post-Roe march. 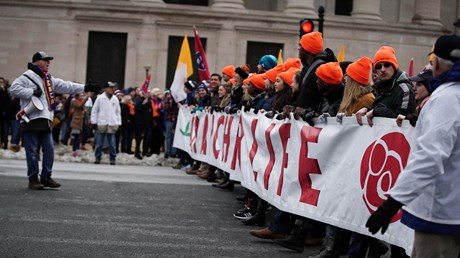 At the 50th annual March for Life—the first national march since Roe v. Wade’s reversal last June—the next generation of pro-life advocates will lead the walk to the US Capitol.

Students from Liberty University will hold the March for Life banner at the front of the procession on Friday. Liberty said more than 500 of its students will attend the event.

Though founded and supported by Catholics, evangelicals have become more involved as March for Life participants and speakers over the years, with Protestant groups adding events to correspond with the annual pro-life demonstrations in Washington.

This year evangelical leaders like Franklin Graham of Samaritan’s Purse and retired NFL coach Tony Dungy will speak at the March for Life rally alongside Catholic advocates like Bishop Michael Burbidge of the Diocese of Arlington and actor Jonathan Roumie, who portrays Jesus in the streaming series The Chosen.

Morse Tan, dean of the Liberty University School of Law, will march with the Liberty students as they carry the banner before tens of thousands of participants.

“I think it’s unusual for an evangelical institution to be asked to carry the banner and lead [the march], but it’s an honor to have been asked,” he said. Liberty is located about three hours from DC, in Lynchburg, Virginia.

Liberty student Summer Smith, president of the school’s Students for Life chapter, will address the pre-march rally at the National Mall. A music major from Rincon, Georgia, she wants her generation to embrace this pivotal moment in the pro-life movement.

“This is such an important time, especially after the reversal of Roe v. Wade, for telling women they have other options and are loved,” …