Americans can now independently resettle those fleeing war and persecution. Christian resettlement agencies are largely on board. 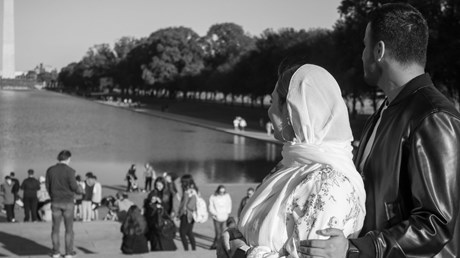 Last year, Mark and Jackie Sawyer cosigned a lease for a couple they’d known for only months—because the couple had recently arrived from a refugee camp overseas.

The Sawyers didn’t realize the headaches and the friendship that would come with joining a group of friends from their Washington, DC, church to sponsor the resettlement of Afghan refugees. They ended up raising $30,000 for the couple, who were expecting their first baby, and staying in relationship with them beyond the initial three-month resettlement period.

This week the pilot program the Sawyers took part in has officially launched through the US State Department, allowing individuals—rather than resettlement agencies alone—to commit to sponsor a refugee for resettlement.

Through Welcome Corps, groups of at least five Americans could apply to sponsor a refugee together and commit to raising at least $2,275 per refugee. For 90 days they would help refugees transition by securing housing, finding jobs, and enrolling children in school.

“You don’t have to have it all figured out,” said Sawyer. “It’s certainly not easy, but it’s probably more doable than you think.”

Refugee resettlement typically goes through nine nonprofit resettlement agencies. These groups, mostly faith-based organizations such as the evangelical agency World Relief, contract with the government to assist and support refugees through their first months in the United States—then often extend the help longer term through the groups’ own funding.

The agencies have been hit by the steep decline in refugee admittances to the US over the past severalyears, but they have decades of experience in this work and are preparing …