Christians must find ways to adapt to impacts of climate change, experts say. 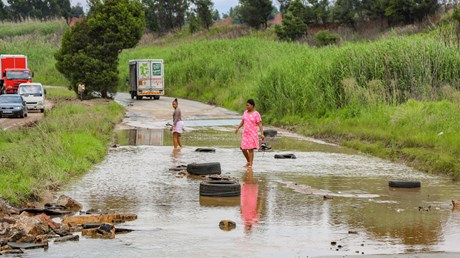 South Africa is reeling from the shocking death of 15 people, including a three-month-old baby, during a river baptism that went wrong last month.

The victims were swept away December 3 by floodwaters in the Jukskei River, which flows through a number of suburbs in Johannesburg, South Africa’s biggest city. The pastor conducting the baptism ceremony, identified by local press as Kind Kupe from neighboring Zimbabwe, was rescued by other members of his church.

The church is part of the Johane Masowe group, started by an indigenous, itinerant preacher in 1930s Zimbabwe. Adherents are known for their prominent white robes and preference for outdoor worship.

Some in South Africa are blaming church leaders for the tragedy.

"I know that baptism is something that has been happening for a very long time, but for someone to be baptized at a river with that heavy flow of water is dangerous," a resident of Alexandria told the News24 website.

Nomusa Bandile, who lost her teenage daughter in the flood, labeled the pastor a “cruel fraudster.”

Some academics, however, are pointing to the tragedy as an example of how humans have trouble adapting to climate change.

“Without proper information filtering to the grassroots on climate change, we are likely to see more tragedies,” said Sibusiso Masondo, an associate professor in the school of religion, philosophy, and classics at the University of KwaZulu-Natal.

He said traditionally in South Africa, lakes, rivers, and the ocean were seen as significant in both cleansing and healing rituals.

Indigenous churches connect this tradition with the Christian ritual of baptism, centering much of their faith and worship on outdoor immersion ceremonies.