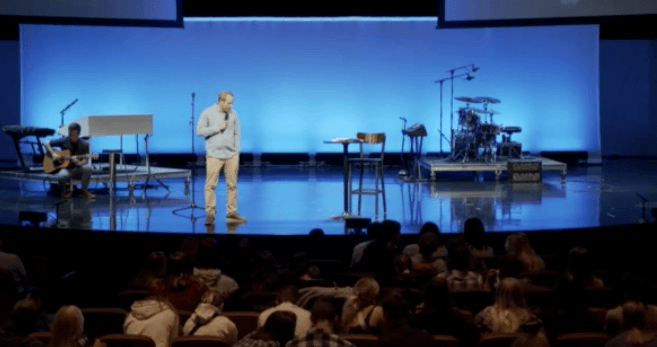 AMES, Iowa (BP) – Members and friends of Cornerstone Baptist Church are recovering after a shooting in its parking lot June 2 left three dead, including the shooter by his own hand.

“… We are more than saddened by the events that transpired,” said a statement on the church’s website. “Our hearts break for all involved, and we are praying for everyone affected, especially the [families] of the victims.”

The first summer gathering of the church’s collegiate ministry, The Salt Company, was about to begin when local authorities received 911 calls at 6:51 p.m. Ames is home to Iowa State University.

“I was horrified and concerned for those involved when I heard the news,” said Tim Lubinus, executive director for the Baptist Convention of Iowa. “I’m praying for the leadership at Cornerstone and all those families affected.”

Lubinus spoke with Baptist Press from Istanbul, Turkey, where he is visiting friends. Word of the shooting reached him this morning when he woke up to a series of texts and voice messages from friends including SBC President Ed Litton. Lubinus served as missions director at Cornerstone for eight years before serving in his current position.

Cornerstone held a prayer service earlier today (June 3). The church’s lead pastor, Mark Vance, referred to the passage shared in the church’s statement, Psalm 34:18, and how the Lord draws near to the brokenhearted.

“Together, we’re here to grieve and to cry and to pray [and] to do that in a way that brings some form of help and comfort,” he said. “We’re asking God to comfort and help us.”

Jerry Montag, father of one of the victims, 22-year-old Eden Montag, addressed the crowd.

“She walked the walk. She died for her faith. I’m proud to have been her father,” he said. “She’s with the Lord. She did her best to walk the walk.”

Officials said today that Vivian Flores, 21, also died at the scene. Both were students at Iowa State and part of the collegiate ministry at Cornerstone. A third female who was with them escaped unharmed.

The day before the shooting at Cornerstone, a gunman killed four people in a Tulsa, Okla., hospital before taking his own life.

In this morning’s press conference, officials stated that the gunman had been charged May 31 with harassment third degree and impersonating a public official in connection with Montag. He posted bond and was scheduled for his first court appearance on June 10. A restraining order had also been issued against him.

A search of the shooter’s residence produced an AR-15 rifle. A 9mm handgun was used in the crime, with ammunition found in the gunman’s truck purchased an hour prior.

Cornerstone was planted in 1994 out of The Salt Company, which had become the name for the ISU Baptist Student Union in 1987. Grand Avenue Baptist Church in Ames, home of an active collegiate ministry, was Cornerstone’s sending church.

“It has a huge impact among college students,” said Lubinus, who was part of ISU’s BSU in the early 1980s and a member at Grand Avenue. “They’ve created a network of churches that also plant churches on college campuses throughout the Midwest and beyond. Around 20 churches have been started through The Salt Network.”

Known for its church-based collegiate ministry and emphasis on developing leaders, Thursday nights are the central gathering point for Salt. Officials stated today that more than 80 students were in the worship center during the shooting.

The North American Mission Board has held a long-standing partnership with Cornerstone to plant churches on college campuses throughout North America. Through its collegiate ministry, the church has sent thousands of students toward national and international mission service, said a statement from NAMB.

“My heart aches for our friends at Cornerstone today,” said NAMB President Kevin Ezell. “They are an incredible church and I’m praying for Mark Vance and Troy Nesbitt and everyone there. I know they are already ministering to the hurting in their community and will walk closely alongside those who have been impacted by this tragedy.”

The shooting was the latest in a series that has rocked the country. On May 14 10 people died in a racially motivated attack at a predominately Black market in Buffalo, N.Y. Twenty-one died May 24 in Uvalde, Texas, when a shooter entered Robb Elementary School and barricaded himself in a classroom. The husband of one of the victims died days later from a heart attack.