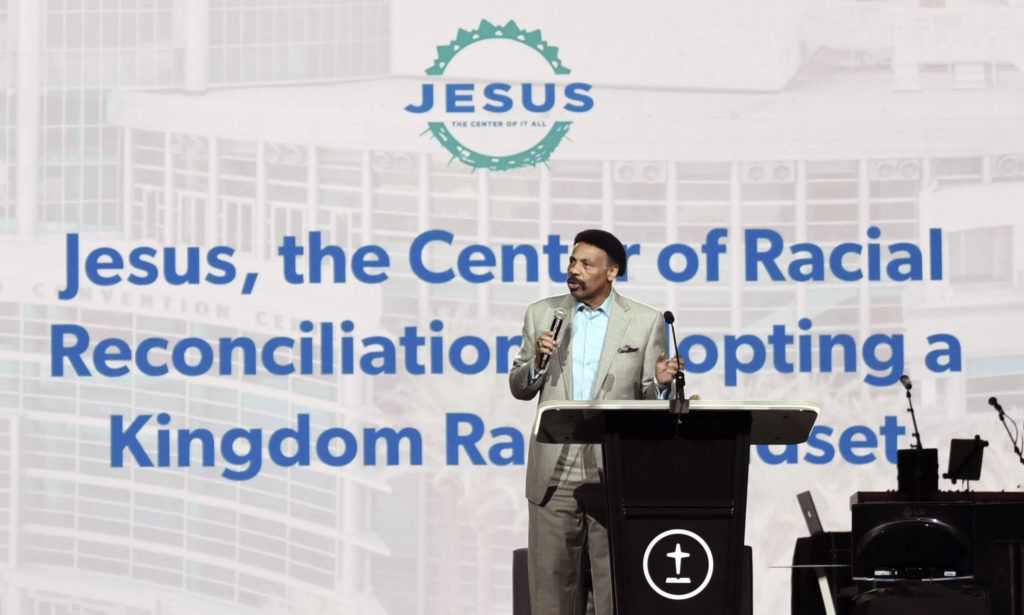 “Southern Baptist Convention, what we hope to do,” Litton said, “is to start a grassroots movement, a local church initiative in your communities to cross barriers of race, different denominations and groups, to begin to meet with people who are likeminded in the Gospel of Jesus Christ, to offer a kingdom solution for the divisions that exist in our land.

“The church should be on the frontline of bringing hope and healing to our communities for the glory of God,” said Litton, senior pastor of Redemption Church in Saraland, Ala.

Luter, the only African American to have served as SBC president, elected in 2012 and 2013, acknowledged “we as a Southern Baptist Convention have made a lot of progress, but now it’s time to take it to the next step.”

Luter referenced Ephesians 2:13-15, that God is our peace who has torn down the “dividing wall of hostility” to “create one new man from the two, resulting in peace.”

Describing the work as critical, the senior pastor of Franklin Avenue Baptist Church in New Orleans, La., said “it’s time for the Southern Baptist Convention to deal with and confront the racial divide in our communities and in the nation with the Gospel of the Lord and Savior Jesus Christ.”

The announcement was part of a segment titled “Jesus the Center of Racial Reconciliation: Adopting a Kingdom Race Mindset” during the morning session of the second day of the 2022 SBC Annual Meeting.

The failure of the church instigated the problem of racism in the nation, Evans asserted in referencing 2 Chronicles 15, and the church must lead in the solution.

“When it comes to our racial divide, it was the failure of the pulpit and the failure of the church, which has put us in this ignominious situation today,” Evans said. “And we are told in 2 Chronicles that only when they came together in unity did God bring them rest, verse 15 says, to the distress that was in the land.

“The political, the social, the racial, the class distress that we are facing, that has helped to be caused by the church, can only be properly dissolved by the church,” Evans said. “If God can’t get the church right, the culture can never become right.”

Joining the leaders as the steering committee are

The Unify Project will be conducted in concert with The Urban Initiative, a ministry Evans co-founded in 1981 with his late wife Lois.

The program, based on an acronym of AAA, will include an annual one-day solemn assembly when congregations will fast and collectively re-invite God into the wellbeing of their community, without compromising any elements of the faith; pastors and leaders addressing with one voice, in love and with biblical clarity, proclaiming God’s perspective on issues facing their communities including identity, race, marriage, and life; and collectively performing acts of kindness throughout their communities.

A key element of the program, Evans said, will be arming church members with kindness cards, encouraging them to do at least one act of kindness weekly toward a stranger, praying with the stranger and if an opportunity presents itself, sharing the Gospel. Kindness cards will be provided for churches to leave with strangers, identifying the church and providing a connection point for relationship building.

“There was chaos everywhere, but God says I caused it. If God is the cure, it doesn’t matter who you elect (to lead the nation),” Evans said. “God is not going to skip the church house to fix the White House.”

The Unify Project’s work flows from The Pledge Group, which Litton helped launch with an ecumenical Christian group of pastors and leaders in Mobile, Ala., after the murder of George Floyd.

The group has seen positive progress in confessing hidden racism and building Gospel-unified cross-cultural relationships, Litton said in a video shared in the annual meeting.

The program will launch in the fall, he said. Details of the program are available at unifysbc.org, and by texting Unify to 63566.