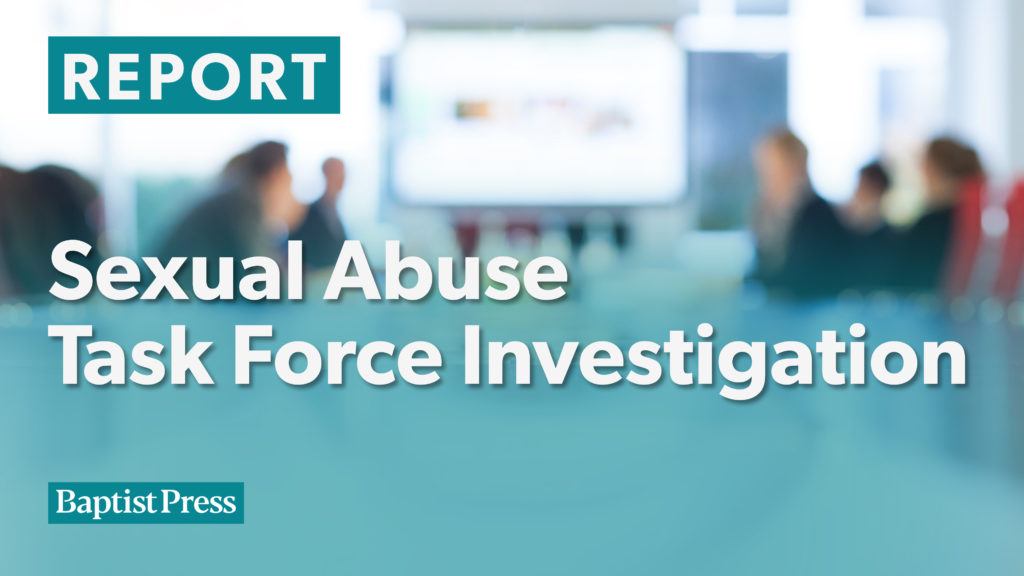 NASHVILLE (BP) – Months of work by the Sexual Abuse Task Force and Guidepost Solutions concerning the alleged mishandling of sexual abuse claims by the SBC Executive Committee (EC) resulted in a 288-page report released publicly Sunday (May 22). The report came at the request of messengers to the 2021 SBC Annual Meeting.

“Our investigation revealed that, for many years, a few senior EC leaders, along with outside counsel, largely controlled the EC’s response to these reports of abuse. They closely guarded information about abuse allegations and lawsuits, which were not shared with EC Trustees, and were singularly focused on avoiding liability for the SBC to the exclusion of other considerations,” the report said.

The report says that for the two decades within the scope of the investigation, survivors of abuse and other concerned Southern Baptists have been met with “resistance, stonewalling, and even outright hostility from some within the EC.”

The task force was charged with reviewing cases and claims of alleged mishandling claims of sexual abuse made between January 1, 2000, and June 14, 2021.

“Over the years, the EC’s response to sexual abuse allegations was largely driven by senior EC staff members, particularly D. August ‘Augie’ Boto, the EC General Counsel and later Interim EC President, as well as the SBC’s long-serving outside counsel – James Guenther, James Jordan, and the firm of Guenther, Jordan & Price (‘GJP’),” the report says, adding: “Their main concern was avoiding any potential liability for the SBC.”

“Mr. Guenther advised that EC staff should not undertake to elicit further information or details about reports of abuse, so that the EC not assume a legal duty to take further action,” the report says.

In addition, the existence of reports of abuse were not shared with EC Trustees “over the years,” according to the report.

What does the EC do?

The EC board of trustees is composed of Southern Baptists from across the convention’s 41 state and regional conventions. Trustees are elected by the Convention at its annual meeting.

The SBC president, SBC recording secretary, WMU national president and EC president/CEO are also ex-officio members of the EC board of trustees.

“Although the Executive Committee does not control or direct the activities of Convention agencies, it reviews their financial statements and recommends the Convention annual operating budget,” says a description at SBC.net. “In addition, it receives and distributes the moneys Southern Baptists give in support of denominational ministries, acts as the recipient and trust agency for all Convention properties, and provides public relations and news services. It also performs other tasks assigned by the SBC and promotes the general work of Southern Baptists.”

The EC “employs an executive and professional staff in its Nashville office.” There are currently 25 employees on staff with the EC.

The Guidepost report listed only one instance of alleged abuse by an EC member in its summary. “During our investigation, an SBC pastor and his wife came forward to report that SBC President Johnny Hunt (2008-2010) had sexually assaulted the wife on July 25, 2010,” the report said.

Investigators found the claims to be credible, according to the report, having verified them “by a counseling minister and three other credible witnesses.” The report says that investigators did not find Hunt’s statements concerning the alleged assault to be credible.

The report says that though high-level EC staff kept a list of reports of abuse among possible SBC pastors, it had no plans to act on behalf of survivors.

“In a May 2019 email to Dr. Ronnie Floyd, the then-EC President, EC Vice President Dr. Roger ‘Sing’ Oldham acknowledged that ‘[f]or the past decade, I have been regularly sending Augie news reports of Baptist ministers who are arrested for sexual abuse, for his awareness. It hasn’t slowed down since the [Houston] Chronicle articles started on February 10.’ Mr. Boto responded that: ‘Yes. We are collecting them, and may even post them in some way, but we’d have to really examine the potential liabilities that would stem therefrom.’”

The Guidepost report also spoke of instances where survivors were further harmed by mistreatment by the EC, “The survivors – those persons who actually suffered at the hands of SBC clergy or SBC church staff or volunteers – who spoke out the most, and who criticized the SBC’s inaction, were denigrated as “opportunistic,” having a “hidden agenda of lawsuits,” wanting to “burn things to the ground,” and acting as a “professional victim.”

The report points to this publication, Baptist Press (BP), on two occasions.

“For example, in March 2019, Jennifer Lyell, a senior executive at an SBC entity, was asked by executives at Lifeway and SBC entity heads to disclose her sexual abuse at the hands of her former seminary professor through a first-person account to be published in BP,” the report says. “Rather than publishing Ms. Lyell’s corroborated account as BP staff had originally drafted it, the account was changed to read as if Ms. Lyell was consensually involved with her alleged abuser. The article as published reported that Ms. Lyell alleged that she had a “morally inappropriate relationship” with her former seminary professor, making it appear that she engaged in a consensual sexual relationship with him.”

Another instance is related to a report from the Ethics & Religious Liberty Commission’s 2019 Caring Well conference.

From the report: “Additionally, an article about the 2019 Caring Well conference, written by an Ethics and Religious Liberty Commission (‘ERLC’) staffer, was sanitized before publication. The draft article had contained quotes from two survivor advocates who had spoken critically at the conference about the SBC’s handling of sexual abuse allegations. When the article was published, some of the story had been deleted, including all references to one of the advocates and all claims that the SBC had failed survivors.”

The report also spends 65 pages discussing the work of the SBC Credentials Committee, a body created to examine whether or not a church was acting within cooperation guidelines held by the SBC.

The report says the task of investigating sexual abuse claims was assigned to the committee before there were proper protocols, guidelines and training in place. “Consequently, the Credentials Committee began operating without adopting any written policies and procedures, such as set timelines/deadlines, protocols for correspondence with submitters and churches, and standards for review. At least one outside expert offered help and support in developing criteria and standards, but the offers were rebuffed,” the report said.

While the report says the committee meant well, it adds: “These and other deficiencies led to delays and communications breakdowns that caused submitters and others to lose faith in the process despite what we believe to be good intentions and effort on the part of the Credentials Committee members.”

Recommendations from the SATF

The Sexual Abuse Task Force was selected by SBC President Ed Litton in the days following the 2021 SBC Annual Meeting. In addition to working with Guidepost to carry out the investigation, messengers gave the task force the responsibility of bringing recommendations to messengers to the 2022 SBC Annual Meeting.

While the SATF says it will be posting formal motions and suggestions before the annual meeting, it has listed a group of “a few initial needs:”

Responses from the SATF, SBC president, the EC, and the Credentials Committee

The task force issued a statement with the report calling on Southern Baptists to take the content of the report seriously and to act upon the findings.

“As the task force, we grieve for what has been revealed in this report,” the task force wrote. “We lament on behalf of survivors for how they have not been protected and cared for as they deserve and as God demands. With broken hearts, we want to lead the way by publicly repenting for what has happened in our convention. We implore our Southern Baptist family to respond to this report with deep repentance and a commitment to the ongoing moral demands of the gospel as it relates to sexual abuse.”

The task force called on Southern Baptists to take action based on the findings of the report. “We must resolve to give of our time and resources to not only care well for survivors of sexual abuse, but to provide a culture of accountability, transparency, and safety as we move forward,” the statement says.

Ed Litton, SBC president, echoed the sentiment of the task force. “There are not adequate words to express my sorrow at the things revealed in this report,” he said. “I am grieved to my core for those who have suffered sexual abuse in Southern Baptist contexts, both for those named in this report and the many who are not. I thank God for the courage and persistence of the survivors and advocates who brought the Southern Baptist Convention to this moment.”

He called on Southern Baptists to act in light of the report. “Amid my grief, anger, and disappointment over the grave sin and failures this report lays bare, I earnestly believe that Southern Baptists must resolve to change our culture and implement desperately needed reforms,” Litton said in a statement to Baptist Press.

He called on messengers to the 2022 SBC Annual Meeting to be prepared to respond.

“The time is now,” he said. “We have so much to lament, but genuine grief requires a godly response. I pray Southern Baptists will begin preparing today to take deliberate action to address these failures and chart a new course when we meet together in Anaheim.”

“To the members of the survivor community, we are grieved by the findings of this investigation,” they said. “We are committed to doing all we can to prevent future instances of sexual abuse in churches, to improve our response and our care, to remove reporting roadblocks, and to respond to the will of the messengers in Anaheim next month.

“This is the beginning of a season of listening, lamenting, and learning how to address sexual abuse in the Southern Baptist Convention.”

In the statement, they announced a special-called meeting on Tuesday, May 24, to “discuss and process the report.”

The SBC Credential Committee also issued a statement regarding the Guidepost report.

“We receive this report with open minds and heavy hearts. We grieve for those impacted by abuse, and we are prepared to repent for anything the Credentials Committee inadvertently failed to do to alleviate the suffering of survivors,” the statement said.

“We are committed to listening and learning from this extensive report and its recommendations. We look forward to implementing recommendations and strengthening the Credentials Committee’s work.”

The 2022 SBC Annual Meeting is scheduled for June 14-15 at the Anaheim Convention Center.

Editor’s note: In an earlier version of this story, Greg Addison was included in a list of those alleged to have supported abusers. The wording does not accurately reflect the nature of Addison’s inclusion in the Guidepost report.